After some major truck repairs, and some major savings liquidation, Katelyn and I load the  truck for some fun in the freezer.  The Canadian Rockies in March are an awe-inspiring alpine goliath.  unfortunately the entire range was experiencing a good storm so the landscape was obscured on our drive, but a few days later it lifted revealing the infamous Rockies.  The continental snow pack found in the Rocky Mountains is notoriously unstable

and unfortunately this held true during our trip.  So we had to set our sights a little smaller and keep off the avalanche prone alpine objectives we had been studying in prior months.   We quickly found plenty to keep us on our front points.  Some of our favorites were the 3 pitch WI 3/4 Snowline in Evan Thomas Canyon south of Canmore about half an hour.  Despite the thin ice in some sections and the party two pitches above us knocking ice our way, we both really enjoyed this outing.

The Weeping Wall is perhaps one of the most famous ice flows in the Canadian Rockies, and understandably so.  Located half way between Lake Louise and Jasper along the Ice Fields Parkway this monster ice sheet stands about 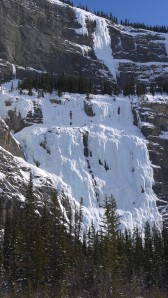 300 feet tall and equally wide.  And that is only the lower Weeping Wall.  Because we arrived late in the day, around noon, we spent some time climbing about on the lower section planing to get an alpine start and go big the next day.  The weather in the Rockies is about as fickle as the snowpack and the next day we poked our heads out of the truck to find it snowing heavily with moderate winds.  So we retreated to Lake Louise for a ski day.

We put away the ice tools and busted out the AT setup for a day of light touring around the Oharea Lake area.  Again we were concerned with the snow packs stability

so we stayed in the trees and on moderate terrain.  Quickly we found ourselves surrounded by more stunning mountains with both of us constantly saying, “if only the snowpack was better.”  But, you get the hand your dealt and we made the most of it.

After 10 days sampling the ice and snow of the Canadian Rockies we packed our wet and frozen gear in the truck and headed for home.  We actually arrived back to Vancouver with an amazing warm spell and found ourselves rock climbing in Squamish in T-shirts.  Kind of funny how the weather can do that.